Have you ever wanted your own army of implacable cyborg beetles?

Oh, come on, you know you have.

Wouldn’t it be great to take a beetle (a), attach a microcontroller (d) with electrodes (e) attached to the beetle’s nervous system and muscles, then control it via wifi (b). 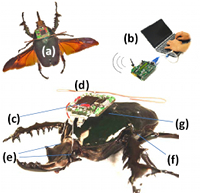 American researchers have apparently created a prototype beetleborg and had the poor godless bastard creature fly across a room under the radio control of its maniacal, scheming human masters.

They built it out of a rhinocerous beetle, since they presumably happened to have one lying around. And because rhinocerous beetles are very strong for their size and have scary big horns. (Apparently they are also clean and make good pets too.)

Practical uses for the remote-control zombie insects include surveillance, finding people trapped under rubble and Egyptology.

I like to think that future models could be equipped with enhanced titanium horns which could be used to free hostages and cut telephone cables.

Anyway, this one scores a ‘9’ on my Meddling With Nature-ometer. Impressive, potentially useful, and fucking creepy.

I leave you with this fun fact about rhinocerous beetles from Wikipedia:

Rhinoceros beetles are also the strongest animals on the planet in relation to their own size. They can lift up to 850 times their own weight. To put this into perspective, if a human of average height and weight had the strength of the rhinoceros beetle, he would likely be able to lift a 65 ton object (e.g. an M1 Abrams tank).

Wins my nomination for headline of the year.

And there’s a lovely picture accompanying the article, of a snarling dog-zombie.

Sadly the article is more about suspended animation than reanimation, so my lofty goal of creating an undead army of brain-hungry chihuahuas is still somewhat elusive. Still, with a procedure relying on exsanguination (to arrest bodily decay—the blood gets replaced with salt water) and bolts of electricity (to get the heart going again—after they put the blood back), this does rate pretty high on the godless-meddling-with-nature-o-meter.

Interestingly, there have been a couple of stories recently about using high concentrations of hydrogen sulphide to induce hibernation in mice, so it seems that science is perhaps only a few years away from being able to do proper human hibernation, like in the movies.

The hydrogen sulphide thing seems to be capitalising on some kind of, normally dormant, mammalian hibernation feature. The one with the saline solution and the dogs is apparently making use of a built-in mammalian deep-sea diving facility:

(Pass the lightning conductor, would you Igor?)

The last time scientists decided to build an artificial brain, of course, they ended up with big boxes with flashing lights, whirring reels of tape… and enough processing power to count up to about 7.

Not that I’m complaining of course. The ‘electronic brains’ of 1960s turned into the almost-useful computers of today. And how would I waste time at work without computers?

This time, however, the high-foreheaded boffins, in thick glasses and lab coats really, really mean it. Chaps at IBM are actually attempting to build a simulation of a human brain, from the molecular level up:

They say that they will be able to feed it visual stimulus and observe its reaction… which sounds a little callous when one is talking about a simulated human.

I mean, basically they’re talking about creating a live brain in a virtual jar. It’s very cool, but kinda creepy.

Estimated time to project completion: 10 years. Given that the next version of the Sony playstation already has a dedicated ‘volleyball’ processor to simulate the dynamics of women’s breasts, I figure that the video game industry is already working on simulated people, albeit from another direction, and as they’re better funded than IBM; they stand a good chance of beating them to the punch.

Now where did I put the lightning conductor and amniotic fluid?