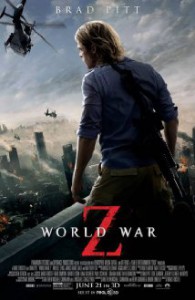 I recently went to see World War Z. I’m not really a big zombie movie fan, but it was suitably exciting and nerve-wracking. I quite enjoyed it.

It is however, a little bit silly.

For example, the friend with whom I watched it, just didn’t buy John Gordon Sinclair as a US Navy SEAL Commander.

I didn’t quite buy how the zombies worked.

Now, if you don’t enjoy a bit of pedantic nit-picking or if you fear plot spoilers, please look away now.

The zombie plague in WWZ are caused by infection: a zombie bites you, then after 6–12 seconds you turn into a zombie. In that respect the zombies are like the Infected (but not, technically, Undead) in 28 Days Later. So far, so plausible: it’s a new, deadly disease, like rabies (possibly related to rabies, it is implied), which is spread from the bite of infected people. The disease causes its victims to act recklessly and aggressively, attacking all uninfected people, while ignoring injuries to themselves.

However, the film later makes it clear that the zombies are actually medically dead (well, undead). A researcher near the end states that the zombies’ circulatory systems are nonfunctional; we see the hand of one of the infected still twitching, even though the rest of the arm has been reduced to bone.

The other interesting feature of the ‘disease’ is that, it turns out, zombies avoid attacking fatally ill humans, on the basis that they will not make good hosts. (This turns out to be a key plot point, and how the humans eventually turn the tide of the zombie war.)

Morbidity is defined as the proportion of a specific disease in a geographical locality.

The shape of a zombie outbreak has been modelled by statisticians in When Zombies Attack!: Mathematical Modelling of An Outbreak of Zombie Infection [Munz, Hudea, Imad, Smith, 2009]. Their analysis reaches the stark conclusion that in the case of a zombie outbreak, humanity is basically screwed, ‘unless very aggressive tactics are employed against the undead’.

That’s basically what happens in World War Z; the zombies just implacably take over, (until the humans find a way to camouflage themselves from the zombies).

Why I don’t buy it

[Edit, 29 July 2013: I do realise that I’m spending over a thousand words talking about why a zombie movie is unrealistic. Yeah, okay. However, I would invoke the 1st Law of Midichlorians: As an audience member, I can ignore silly things in movies as long as the film itself doesn’t try to explain it too much, or to get all scientific. Once the filmmaker commits that sin, they’re essentially declaring open season…]

It is possible to animate a corpse. Muscles are activated by electricity, and if you apply an electric current to a muscle, alive or dead, the muscle will contract. Famously, Giovanni Aldini demonstrated this effect of ‘Galvanism’ on executed murderer George Forster’s body at Newgate, London in 1803.

So if Something were able to take over a body and apply current to the muscles, it could cause it to shamble, or run, eat brains and generally do zombie things. We can assume that the Something dwells in the skull, since, as in all zombie lore, you kill a zombie by going for the head.

How would the Something a) generate the electricity to move the muscles and b) direct power to the right muscles at the right time in order to run and bite?

The Something would have to install its own, parallel power plant, and energy and control networks in the host, in, going by this film, 12 seconds. It would also, as raw material, have to build these out of the existing internal organs (leaving the muscles, sinews and skeleton, and some of the sense organs alone). And given how energetic these zombies are, its new systems would have to be as efficient, if not more so, than the originals. A tall order.

The human body already has a network of nerves (for sending signals to muscles) and blood circulation and lungs and digestion (for providing power to the muscles). Basically, Something which wanted its human host to move around would be best advised to take over the brain, and leave the rest of the system functioning relatively normally.

We have plenty of natural examples of parasites taking over the brain of a host animal, and leaving the rest of the body functional. Consider the zombie ant fungus, or toxoplasmosis. The start of WWZ references ant colonies, so the filmmakers were probably thinking along these lines. (They also reference The 2nd Law by Muse, which is excellent.)

If you’re going to make a movie showing zombies ‘realistically’, they can’t be dead bodies; they have to have (most of) their systems working. Unless the cause of zombification is some kind of parasite, living in the brain cavity, and providing energy and control for the whole body (by eating brains?). That’s a pretty specialised parasite. It would have to have been evolving (and zombifying humans) for quite some time. We would expect to see similar parasites in other, similar animals.

An inherent property of zombies, either as reanimated corpses or taken-over living beings, is that the host body will eventually die, or run out of energy.

In 28 Days Later, where the zombies are (living) humans infected with a virus, they eventually all just starve to death. A human being can survive about 3 weeks without food, but they wouldn’t be doing much running, or even shambling, at 3 weeks.

Even as reanimated corpses, zombies must eventually just rot and fall apart. A living body expends quite a lot of energy fighting infection, and repairing wounds. In this film, as with other zombie movies, the undead don’t care about damaging themselves and they don’t seem to heal wounds. A zombie is going to succumb to entropy eventually, if not sooner.

So apparently the WWZ zombies can sense fatally ill humans, and don’t bother trying to infect them. At the end of the movie, Brad Pitt infects himself with Cholera or something, and all the zombies totally cold-shoulder him. This is apparently an adaptive mechanism to only make the fittest and fastest zombies.

So this is the thing I really had a problem with.

Firstly, there’s no cost to the zombies to basically infect everybody, young and old, sick and healthy. If there are a few less-effective zombies, so what? It’s no skin off the rotted noses of the ‘healthy’ undead. The zombie virus keeps its host undead anyway. Are they worried about catching zombie-undead-measels?

Secondly, if the zombie plague only ‘wants’ the fittest, healthiest individuals, why does it do such an awful job of looking after its hosts after it infects them? They’re battering around, immune to pain, and injuring themselves on doors. And they’ll die/decompose after a few weeks anyway. How much difference can a little cholera or cancer make in that time?

Thirdly, what’s the mechanism for the zombies magically detecting any fatal illness, but not having the same reaction (avoidance) when we see Brad Pitt seriously injured near the end of the movie? Clearly nonsense!

Remove The Head or Destroy The Brain

Or, you know, just set them on fire. They work that out at the end of the movie. I’d be trying that a lot earlier on. Zombies are famously stupid and immune to pain.

Admittedly flaming zombies are going to be running around and setting fire to the furniture too, but once the zombie plague starts, civilisation is fucked anyway, and we’re going to have to redecorate either way.

And that’s why it’s all a load of old bollocks.

But, you know, it’s all good fun, and very exciting, as long as you leave your brains at the door.