Here is a picture of a standard UK PC keyboard. Can you spot the obvious mistake? 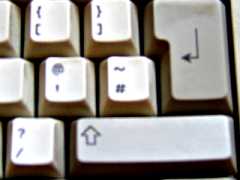 Of course: <shift>-single-quote gives you the ‘at’ symbol (‘@’). How ridiculous! (The double-quote is on the ‘2’ key.) This is one thing at least the Americans have got right. Here is a picture of an American-style layout: 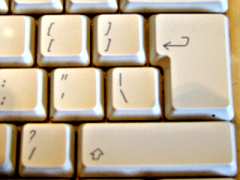 As you can see, the single and double quotes are on the same key, as nature intended. (Actually, it’s a picture of my U.K.-edition Apple Macintosh… so it’s really just British PC-compatibles which screw up this bit.)

Even the Americans (and Apple Computer) aren’t perfect, though, because no newspaper publisher, magazine or book in the world uses straight up-and-down quotes like the ones you get from these keys. As every primary school child knows (and forgets by the time they get to secondard school, probably), quote marks should look like miniature 6s and 9s, ‘like this’.

Some software turns your straight up-and-down quote marks into proper left-quotes (little ‘6’s) and right-quotes (little ‘9’s) as you type, but it often gets it wrong, rendering, for example, what should be “fish’n’chips” as “fish‘n’chips”. Not all that surprising really: it’s a bit like if computer keyboards only gave you lower-case letters, and the computer tried to guess where the capitals should go.

This is my solution: 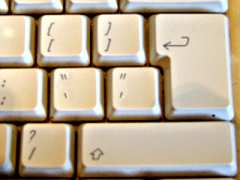 So what about typists who actually want straight up-and-down quote marks? We take them outside and slap them until they see sense. Humanity managed fine without them before, so we can manage without them again. (If you really needed them, you could hold down the <alt> key to get them.)

The main problem with this scheme is that, by and large, the population knows little enough about punctuation—apostrophes are abused routinely, and quote-marks are to be seen sometimes, oddly, used for “emphasis”—that setting them loose with an additional set of punctuation could be a recipe for grammatical disaster. One can only hope that eventually they learn to use this new power responsibly.

And then will be time to implement Phase II of my masterplan, to ensure that PC users around the globe are able freely to type ¡, ™, ∆ and ∞ without resort to the <alt> key and the numeric key pad.