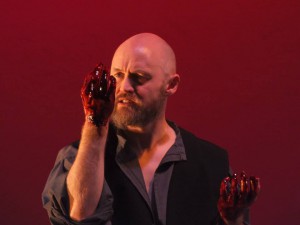 Have a need to drench your hands/face/exposed skin in something which looks like blood but which isn’t? Try this recipe for dark, gloopy, very glossy blood, which is edible, washes off, and is (fairly) non-drip.

Recipe is slightly modified from one kindly provided by neo-burlesque performer Mynxie Monroe.

END_OF_DOCUMENT_TOKEN_TO_BE_REPLACED

I looked up a line from the play what I was in (A Midsummer Night’s Dream by Mr William Shakespeare), “…A paramour is a thing of naught.”

I didn’t understand it, then found out that ‘thing of naught’ means (well, USED to mean), ‘thing of sin’.

And hence the word ‘naughty’.

(Doesn’t help that some online translations render the line as ‘a thing of nothing’.)

The line, just to confuse you further, is uttered by a character who is himself making a mistake, while trying to correct someone else’s English (ah, Facebook, you’re not so new after all!)

Peter Quince:
“He [the character Bottom] is a very paramour for a sweet voice.”
[intending to mean ‘he is the perfect specimen of someone with a lovely voice.’]
Francis Flute:
“You must say ‘paragon.’ A paramour is—God bless us!—A thing of naught.”
[meaning, ‘you mean “paragon” not “paramour”, because “paramour” means something dirty.’]

A paramour is a very courtly and romantic word for a lover, so it’s far from naughty.

But he uses ‘paragon’ correctly.

And people say that Shakespearean comedy is difficult to get.

Phrases which give your away your favourite luvvie for the shallow lier they really are:

“It’s a very wordy play, isn’t it? How do they manage to remember all these lines?”
what they mean: “My god, I was bored out my mind. That fucking play could have been cut to half its length and still been too long.”
“What this play needs now is an audience.”
what they mean: “What this cast needs is a kick up the arse. Maybe if they face the prospect of paying members of the public baying at them they might get their act together. Both acts, in fact.”
“It was very… good.”
what they mean: “It was godawful, but I can’t bring myself to say it to your face.” (Often followed by “It’s a very wordy play…”)

Shameless, that’s what I am, shameless.

A Funny Thing Happened on The Way to The Forum opens on Tuesday 13 June at The Citizens’ Theatre, Glasgow. It’s spectacularly funny and you should buy a ticket this instant.

Think of it as a proto-Carry-on-Up-Pompeii… It literally was the prototype for Up Pompeii, and starred Frankie Howerd in the London stage version. Ooh Missus.

It’s wall-to-wall with high-camp and low comedy. Features a script by M*A*S*H writer Larry Gelbart (and Bert Shevlove, who didn’t write for M*A*S*H but evidently was still very funny), and some surprisingly catchy songs by the generally-dissonant Stephen Sondheim.

And, well missus, you don’t get many of them to the pound.

There’s a frankly ridiculous plot: the slave, Pseudolus who wants his freedom; the lovers, Hero and Philia, who want each other; the great general, Miles Gloriosus, who wants Philia too; Domina, Hero’s mother, who likes the look of Miles; Senex, Hero’s father, who is generally trying to escape from Domina. Missing virgins, confused potions, cunning disguises, mistakes, fakes, rhymes, crimes… Comedy ensues, generally.

In case that doesn’t ding your dong: the cast is very talented and I’m assistant directing (which generally involves trying to sneak as many cheap gags past the proper director as possible).

You’ll titter, I promise. Ooh, yes madam, titter you will!

There, I’ve spoilt the ending for you, but you may enjoy watching the play anyway, if that’s your bag.

It’s a good cast, and a very interesting script. Not literally historical, but based around scenes representing a particularly ill-fated 3 years of Mary Queen of Scot’s reign, from the point at which she had established herself in Scotland, to after her disasterous marriage to Darnley, when it was all starting to go seriously downhill.