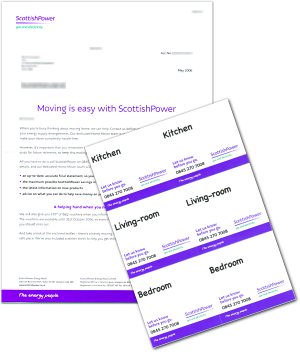 Most people would not complain about receiving too few letters from their utility companies. Really.

Dispite this, it seems that Scottish Power employ an entire department devoted to fulfilling the needs of this select, and insane, minority.

To the left is an image of their latest ploy.

Now, first some background: I’m not moving house. That’s really all the background you need, I think. Because the first thing you will notice on the letter is the headline “Moving is easy with ScottishPower”.

So, firstly, I’m irritated that they should send a letter (plus a leaflet, plus stickers) to probably tens of thousands of homes, to catch the thousands who happen to be moving house. That’s just wasteful. It’s junk mail.

But secondly, I’m irritated because it’s quite fucking patronising: “…take a look at the enclosed leaflet—there’s a handy moving checklist which you might find useful to keep in a safe place”. Oh! Yes! Of course! A handy ‘moving house’ leaflet from ScotPower’s marketing department which I will file under ‘useless fucking crap for wasting drawer space’.

Then there’re the stickers (also pictured), for handily sticking on your boxes so that the removal men know where to put stuff. Aren’t they handy? Or at least they might be if:

This leads to the only possible conclusion: ScottishPower want to remind people to tell them when they move house—fair enough. However: they can only communicate this by wrapping it up in a half-hearted effort to appear to care about me. “We care about you: have some useless stickers. And a leaflet.” And by wasting paper. And pissing me off.