Shame the second one sucks.

It’s sub-Red Dwarf (the unfunny years), improbable in plot and unconvincing in execution.

O! To have one’s expectations raised so high, then dashed so low!

UPDATE: Just watched episode 4… which was almost a return to the form of the first one, so maybe it’s not a complete wash-out.

Now if only Channel 4 would sort out the stupid, D-bloody-RM-encumbered video format on their website and let people like me who don’t really ‘do’ television watch it without pain and I might forgive them for the woeful mess which was the second episode.

The funniest Irish joke ever starts, “There were these three priests on an island…” It ran for 3 series on Channel 4.

One of the writers behind The Funniest Irish Joke Ever, Graham Linehan, has written a sitcom about an IT department. Channel 4 has the first episode for free download in WMF format and I strongly encourage you to watch it. It’s exceptionally funny. 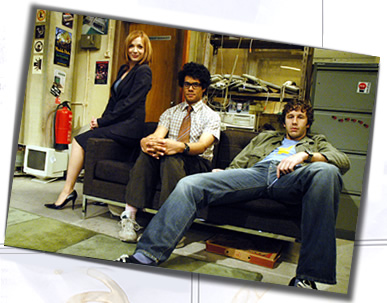 It has the kind of throwaway genius, surreally freakish characters and beautifully deadpan acting which made Father Ted the sort of television that doctors have to warn their patients against watching immediately after surgery. It also contains enough truth and affection for its subject matter that IT people the world over will snort their coffee all over their ThinkGeek t-shirts at the in-jokes*. That’s a promise.

Plus, the pilot episode has two references to The A Team.

* The end credits of the pilot have a slideshow of pictures with music playing over them. The music is the default ‘slideshow’ music from iPhoto. (Or so…someone…told me.) …It’s probably funnier if I don’t have to explain it. 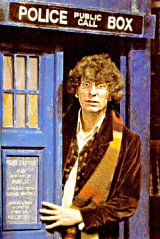 New(ish) series of Doctor Who: watch it, as if the very future of Earth depended upon it!

Frankly, for millions of Earth people, Tom Baker is The Doctor. Think ‘Doctor Who’, and think ‘wild eyes and long scarf.’

To his credit, Christopher Eccleston is on record as saying that when he approached the rôle he aimed only to be the second most-definitive doctor, but for my money he gives Tom a good run for his money. I think he can be allowed to be equally as Doctor as Tom.
END_OF_DOCUMENT_TOKEN_TO_BE_REPLACED